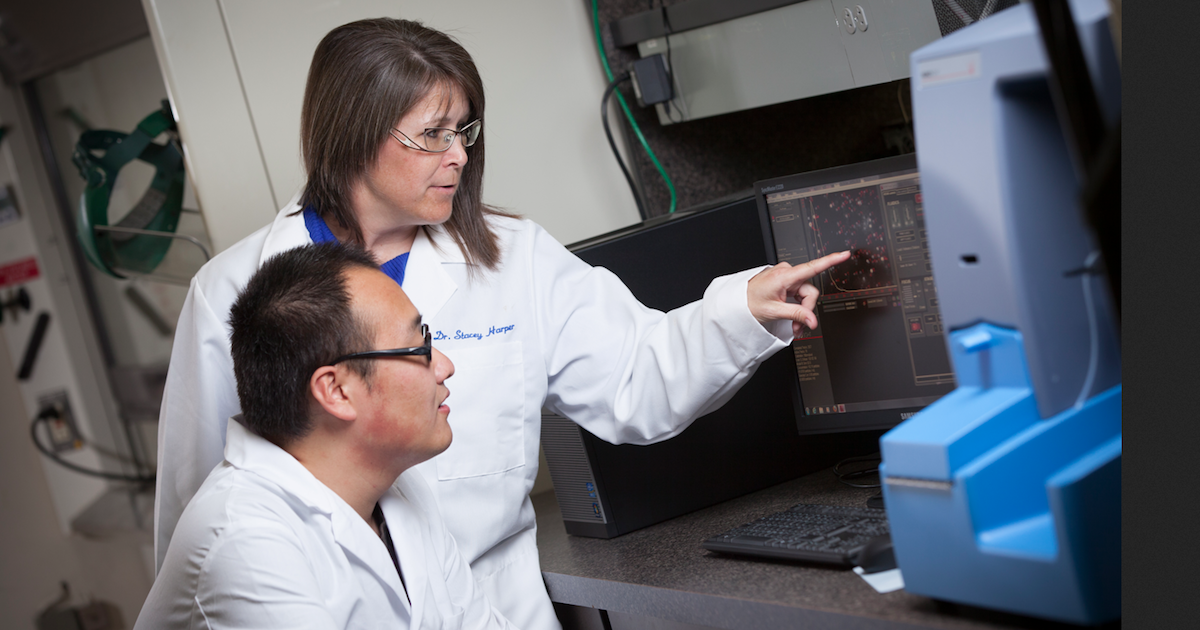 Perhaps you have seen those novelty miniature soccer balls and maybe even kicked one around with a toddler. While a little awkward for an adult, these balls bounce, roll, and generally behave as you would expect. Imagine now if you shrank that ball into a teeny, tiny version of itself, a nanoparticle sized soccer ball. This new ball does not bounce or behave as it did when you could kick it. It’s acting like a semiconductor or possibly bending light like a prism.

For several decades, scientists have known that nanomaterials do not behave simply like tiny versions of bigger objects. They have taken advantage of these unique properties to create a multitude of new systems, substances, and technologies, the field of research and development known as nanotechnology. However, because nanomaterials can behave unexpectedly, they can also interact with biological systems, such as human cells, in equally unexpected ways.

To keep nanotechnology in check, Dr. Stacey Harper conducts toxicology research on a wide variety of nanomaterials, specifically looking at how they might cause harm to animals that come in contact with them. Her research spans the gap between engineering and biology and helps guide the development of safer nanotechnology products.

Harper originally came to the Environmental Health Sciences Center (EHSC) as an NIEHS post-doctoral toxicology trainee and is now an investigator with the EHSC and an assistant professor in both the departments of Chemical Engineering and Environmental and Molecular Toxicology. She is also a signature faculty fellow at the Oregon Nanoscience and Microtechnologies Institute and communicates regularly with industry, government, and research scientists.

To examine potential harmful effects of nanomaterials, Harper and her research team uses a variety of animal models. Zebrafish embryos are primarily used for the rapid screening of many different types of nanomaterials. Because zebrafish embryos develop from a fertilized egg to a fully formed larva in a mere 24 hours, this model is much faster than mammalian models such as mice, which can take weeks to months. Any harmful developmental effects such as organ or spinal defects can be observed in zebrafish within 5 days. The embryos are smaller than a sesame seed, so Harper can simultaneously run 96 tests on a small plastic tray not much bigger than an iPhone.

Fortunately, most of the nanomaterials tested by Harper’s research team have not shown adverse effects on embryos. But those that do, Harper notifies the developing engineers so they can modify the product and also prevent development of similarly harmful nanomaterials. Information gained from the testing and retesting nanomaterials is available in the Nanomaterial-Biological Interactions knowledgebase, an open-source database that Harper developed. This project consolidates and integrates data on nanomaterial effects in different animals in an effort to develop unbiased tools that can predict how a nanomaterial may behave before it is even made.

Harper received a five-year, $1.9 million award as an Outstanding New Environmental Scientist (ONES) from the National Institute of Environmental Health Sciences (NIEHS).

Harper enjoys being one of the gatekeepers of the field of nanotechnology, keeping a watchful eye on the steady stream of new and exciting developments and contributing to the creation of safer products. When not doing research, Harper loves to take advantage of the Oregon outdoors with her family and is an avid hunter and fisherwoman.